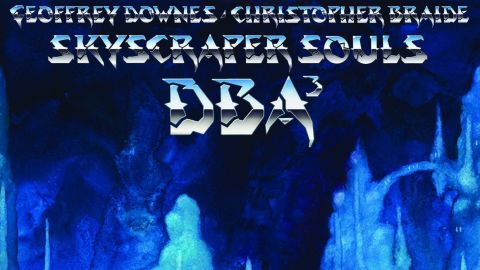 Geoffrey Downes found his calling in life when, in May 1980, as part of one of those wonderfully ‘WTF’ moments, he replaced Rick Wakeman in Yes. Besides being a co-founder of Asia, it’s a spot he has also held for the past few years, returning to the Yes coop in 2011. However, let us not forget that Downes was first recognised as a pop music artist. Indeed, most of us will first have seen him sporting

a preposterous silver suit in the video for The Buggles’ Video Killed The Radio Star. That’s a roundabout way of stating that pop music is every bit as much a part of the keysman’s DNA – or in this case, DBA – as progressive sounds.

For the past five years Downes has reverted to his roots to make records with Chris Braide, a British-born, LA-based singer, songwriter and producer who has worked with Beyoncé, Britney Spears and Christina Aguilera among others. Together they milk the best bits of pop and prog at its most atmospheric and mellifluous. Skyscraper Souls is their third album and the first to feature a human rhythm section – bassist Andy Hodge and the much-travelled percussionist Ash Soan (Trevor Horn, Squeeze, Adele, Robbie Williams and Gary Barlow). The decision to replace the drum machines and samples has really paid off.

The album also features numerous special guests. XTC’s Andy Partridge adds guitar parts to four of its nine tracks, the unlisted Finale being a reprise of opening number Prelude, which features an exquisite solo. Partridge also provides mandolin and acoustic embellishment to the hauntingly beautiful Glacier Girl, but best of all is his contribution to Darker Times, a Floyd-flavoured nine-minute piece that ends the album in inspiring, uplifting fashion.

Partridge’s Big Big Train bandmate David Longdon performs harmony vocals to Braide’s lead on the pastoral Tomorrow, also adding a couple of tastefully short yet impeccably placed flute melodies. Meanwhile, Lighthouse discovers Tim Bowness of No-Man discreetly yet effectively melding his voice with Braide. Next it’s the turn of Marc Almond to alternate with Chris, and together the pair weave an intoxicatingly dark collage of sound.

But best of all is the album’s namesake: 18 hypnotising minutes that see Braide sharing the mic with Kate Pierson of The B-52’s. The concept of such a collaboration is perhaps incongruous but, by golly, it works.

Skyscraper Souls is an album that works on a number of levels. It can be scrutinised, debated and dissected. But the best way to enjoy it is to sit back and simply allow its contents to work their magic.