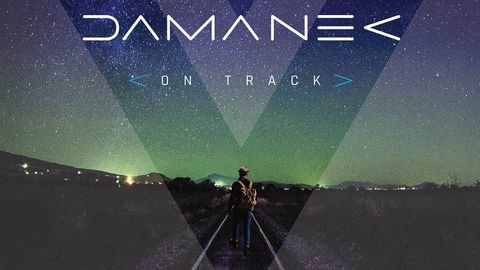 Guy Manning has become something of a latter-day prog legend. As ‘Manning’ he managed to serve up an album every year for the best part of 15 years, including stand-outs like Anser’s Tree and Margaret’s Children. His early association with The Tangent earned him significant props during a period when prog was genuinely out-of-fashion. His combination of Al Stewart-influenced storytelling and complex arrangements has already ensured an honoured place in the pantheon. His new project Damanek deserves to push him into wider exposure.

Damanek is, in many the respects, the fruit of friendship. Its name derives from the band members who’ve worked on and off with each other over many years: Toxic Smile’s Marek Arnold, Maschine’s Dan Mash and Manning. Thus, Damanek: DAn, MANning and MarEK. Sean Timms of Southern Empire completes the line-up.

What’s outstanding is its combination of confidence and skill.

The simplicity of concept ends there. On Track tackles bold themes, railing, by turns, about the state of the world, delving into mythologies, as well as crafting the occasional delicate piece of storytelling. Opener Nanabohzo And The Rainbow explores the story of a Native American trickster god and combines Manning’s uncanny gift for both groove and catchy refrains. The sweeping keys of Arnold and Timms take it stratospheric. Songs like Long Time Shadow Falls deal with the impact of humanity on the environment, while Big Parade doesn’t hold back in its critique of warmongering politicians. If Madison Blue is classic Manning territory – telling the story of a fictional girl in search of herself – On Track finishes with a 14-minute epic about pollution, Dark Sun.

This level of ambition might make On Track unfocused and overblown. However, Damanek are too skilled to let that happen. Certainly, Big Parade – with its oompah-march feel – is closer to silliness rather than satire, but what is outstanding about On Track is its combination of confidence and skill. Manning has never sounded more himself. On early albums, he occasionally channelled mid-era Ian Anderson. No more. The bolder production and the unifying presence of Mash, Arnold and Timms seems to have liberated him. Manning comes across as a man at peace with himself and his voice.

It helps, of course, when you have guest talents as extravagant as Luke Machin spraying pyro guitar over the tunage. However, without a presiding intelligence, individuals often add up to less than the sum of the parts. Manning supplies that and some. This album is rich, disciplined and damn catchy. Rather than being depressing, its handling of dark themes makes it a stirring call to arms.