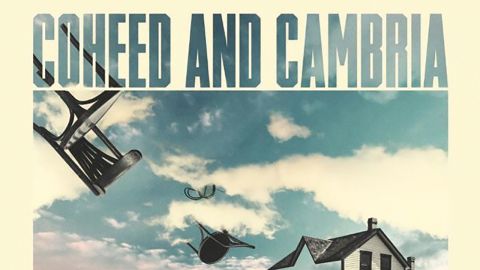 For the uninitiated, past Coheed albums charted the ‘Amory Wars’, a story focusing on the characters Coheed and Cambria Kilgannon and, later, their son Claudio. Fans of the band may well be shocked to find out that this, their eighth long-player, is the first that isn’t a concept album.

In simple terms, this means that The Color Before The Sun can concern itself with universal, accessible themes, finally completing Coheed’s journey toward an anthemic, classic rock sound with a wider appeal than the post-hardcore, emo and modern progressive rock scenes that have nurtured them along their way.

The only problem with this neat summary is that it’s not really true. Since their earliest days they’ve been able to pen compelling singles even within the frame of their concept albums, though early songs were perhaps crafted more towards that emo offshoot of post-hardcore that enjoyed popularity in the mid-2000s. Meanwhile, their classic rock and prog rock influences have been more obvious on every release, and particularly prominent on their latest albums, the Afterman diptych. The fact that the tracks on The Color Before The Sun are their most stadium- and radio-friendly cuts yet is, one suspects, more a coincidence than a stepping-away from the Amory Wars saga.

A great record, their most accessible yet.

Chief among these huge, hook-filled anthems is You Got Spirit, Kid, with Eraser and Here To Mars treading a similar path, their colossal choruses set on fire by frontman Claudio Sanchez’s unique vocal. Colors is a change of pace, more downtempo and atmospheric – it could almost pass for a pensive number from …And You Will Know Us By The Trail Of Dead, if it weren’t for the slick production. Atlas is, on the face of it, run-of-the-mill mainstream modern rock, but in its more interesting moments manages to bring to mind a hint of latter-day Zeppelin and maybe a dash of Manchester Orchestra. Peace To The Mountain closes off the record with an extended country-lite ballad that’s slightly reminiscent of Smashing Pumpkins around the time of Adore.

The only track that misfires a little is Young Love, which never quite gets over its opening riff, and despite neat atmospheric guitar work and an emotive vocal, the failure to develop that idea enough throughout the track leaves it feeling over-repetitive.

All in all, perhaps the biggest surprise of The Color Before The Sun is how much it seems like business as usual for Coheed despite the seismic shift that underpins its creation. Moreover, when judged against the progression of the band so far, it is a great record, and their most accessible yet.