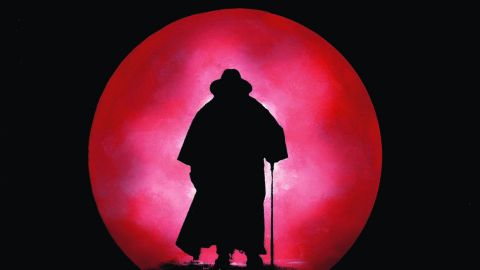 Prog has never feared the theatrical, but what about musical theatre? If snobs childishly sneer at prog’s pretensions, how much more so ‘musicals’? Thank prog, then, for Clive Nolan. For the past 10 years, the Arena and Pendragon keyboard maestro has channelled his not inconsiderable gifts into making what might be called prog opera. His first musical She was based on the classic Rider Haggard book, but King’s Ransom, like its predecessor Alchemy, is set in steampunk Victorian London.

Once again, at its centre are the adventures of Nolan’s alter ego, Professor King. This time he battles to save the Prime Minister and England from the conniving Colonel Scovil and his sidekick, Roza. Truly, Nolan has a marvellous, labyrinthine imagination. The twists and turns of plot bend like the London sewers in which the show is partly set. However, the strength of King’s Ransom lies in its magnificent blend of pomp, archness and thrilling storytelling. Musically, Ransom brings together Nolan’s trademark epic keys, a keen ear for melody, and multi-layered vocal work.

For those who’ve yet to come across a Nolan musical, think stadium prog meets Les Mis meets Dickens smoking some strange, aromatic substances. The Caamora Theatre Company work with Nolan to bring these incredible creations to life. Nolan plays King with gritty aplomb, but there are standout vocal performances from Gemma Ashley, Jamie Anderson and Verity White, plus Chris Longman as villain Scovil.

Pomp, however, only takes a musical so far. The old test is twofold: does the drama touch your soul, and do you come away singing the tunes? Nolan wins on both counts. The big choruses such as on Silent Army have earworm quality and the bombast of tunes like Salvation Has A Name should bring a grin of joy to even the most jaded prog fan. The score is catchy, fresh and, best of all, doesn’t shy away from being rock music. Unlike some old rock operas from the likes of Lloyd Webber, Nolan is a musician who doesn’t just bring in a heavy riff for surface effect. Rather, after years in the prog trade, he knows how rock ensembles work from the inside out.

Like many thrillers, King’s Ransom builds to a famous showdown between the hero and his nemesis. The outstanding Set For The Task involves a delicious vocal interplay between Nolan’s King and Longman’s Scovil and, rightly enough, King’s Ransom culminates in one hell of a cliffhanger. After the emotional roller coaster of this musical, it would be a tragedy if Nolan and co were done any time soon with the mysterious Professor King.