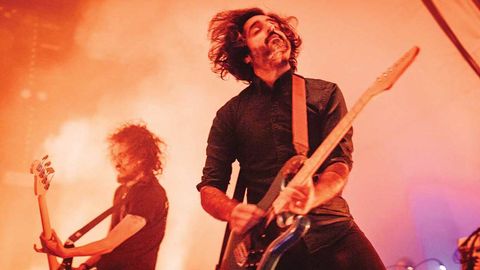 While the first day of the festival has exciting up-and-coming progressive bands like Town Portal, it’s the promise of a Russian **Circles **set that has drawn an early bird crowd. Opening with a powerful combination of 309 and Vorel, they blast through a stunning set including highlights of Deficit and Afrika, as well as earlier material in the form of Youngblood and Death Rides A Horse.

On Friday, Alpha Male Tea Party blow the** cobwebs away with a set leaning heavily on new album Health. The highlight is new single I Still Live At Home, and bringing on a choir to sing the end of No More is one of the most powerful **moments of the weekend.

Cavanagh cameo, but instead there’s an excellent set of minimal techno and post-rock that’s one of the best of the weekend.

Opening up the PX3 on Saturday, there’s a surprise in the form of local Bristol post-rockers Poisonous Birds. Their sparse but punchy songs display a ‘less is more’ ethos with nods to industrial rock. Hopefully they’ll put out a proper record and maybe come back higher up the billing.

The highlight of the festival is The Physics House Band, who draw one of the largest crowds of the weekend. Their bananas fusion of classic prog, jazz and intense, psychedelic-influenced math rock can be too dense at times, but Calypso from new LP Mercury Fountain offers a way in, sneaked between a blinding whirl of drums and saxophone solos. Titan from Horizons/Rapture also gets a wild reception, as would be expected of their signature track.

Probably the only band that can give The Physics House Band a run for their money are TesseracT. Phoenix and Survival from Polaris are lapped up by the crowd, while Nocturne and Deception are highlights from the heavier material they play. The band are polished and confident after touring Polaris and it’s impossible not to get caught up in the performance.

Explosions In The Sky are many peoples’ gateway** into the post-rock genre, and while their music has developed over the years, they’ve helped to define a good part of what modern post-rock is, so there aren’t a huge number of surprises during their set. Some tracks feel sonically quite a departure, for example Wilderness and Disintegration Anxiety from new record The Wilderness, though the flip side is that the older, more classic material works hypnotically well with their ebbing **and flowing light show.