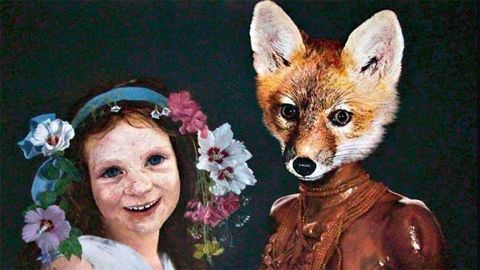 Who Do You Love

Arabrot’s eighth long player was written and recorded in a church in the woods of Dalarna, rural Sweden – now home to frontman Kjetil Nernes. One can think of no more fitting an environment for an outfit that excel so well at evoking the depravity lurking within our higher sensibilities, even if they continue to do so frustratingly under the radar, as, like its predecessors, Who Do You Love proves to be one of the scene’s most individualistic, interesting releases of the year so far.

You get the feeling that if the band had been about in the late 80s/early 90s they’d have been huge, so effectively do they channel the charisma of alt-rock’s most charismatic icons – Kjetil the bastard offspring of Iggy Pop and Killing Joke’s Jaz Coleman – the transgressive figurehead we sorely need.

Maldoror’s Love gets under your skin with a plaintive guitar riff backing Kjetil’s warped serenade, flourishing into a seductive groove. On Warning he barks impertinently from a podium at a deviant’s rally. Pygmalion follows, a mellifluous denouement after an opening salvo of short sharp rock shocks that is as beautiful as it is disarming, setting the stage for Sinnerman, a ubiquitous African-American spiritual song previously covered by the likes of Nina Simone and Peter Tosh. Kjetil’s interpretation is an unabashed love letter to long acknowledged influence Nick Cave, a crowing comeuppance for sinners attempting to escape divine justice that degenerates into rapturous mania.

The predatory swagger of Look Daggers follows; a sleaze through hell and back. Uniform Of A Killer makes for an odd tale to close the record, an intriguing musical labyrinth leaving a lasting impression. Ultimately, Arabrot records are a universe unto themselves, any comparisons with rock icons past at once fitting and odious, because like the best frontmen, Kjetil Nernes is a unique proposition, an iconoclast for dark and dysfunctional times, whose perverted dogma you would do well to fall under the sway of.