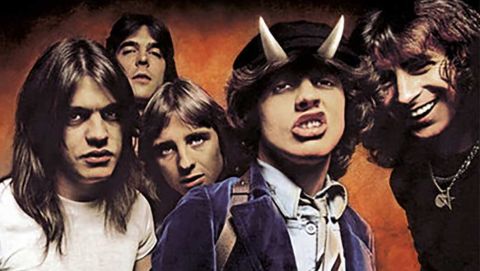 Highway To Hell was AC/DC's big breakthrough, their first million-seller. And, sadly, the last record that Bon Scott ever made.

Highway To Hell was a triumph rescued from the jaws of disaster, an album with so much commercial expectation riding upon it that Atlantic Records originally attempted to bully the band into covering The Spencer Davis Group’s 1966 hit Gimme Some Lovin’ in a desperate bid for chart action.

Mindful that the pressure was on, Malcolm Young (and the group’s new hot-shot manager Peter Mensch) fired original producer Eddie Kramer, hired in Robert ‘Mutt’ Lange, and forced his band to knuckle down for three month’s solid graft in the studio.

The result was the most polished, professional and powerful album of the quintet’s career…and subsequently their first million-selling disc in America.

Mutt Lange’s genius was to translate all the blood, sweat and tears squeezed out of his charges in London’s Roundhouse Studio into an album that sounds effortless, care-free and spontaneous. AC/DC never lacked balls, energy or thuggish aggression, but on Highway To Hell their swinging punches were delivered with precision and poise, impacting with heart-stopping force.

The devil, as ever with Lange, is in the details here. The lairy gang vocals on the chorus of Walk All Over You (close your eyes and tell me you can’t instantly see Malcolm Young shuffling forward towards his mic stand as you read those words). Those economical, brutally effective guitar stabs on the verses of Touch Too Much. The breath-robbing full-tilt climax of If You Want Blood. The unstoppable, rolling momentum of Girls Got Rhythm.

Bon, throughout, is at his most commanding, compelling and irresistible, cock o’ the walk in a rough ‘n’ tumble, spit ‘n’ sawdust world where “nobody’s playing Manilow”, rolling with the punches (both Beating Around The Bush and Shot Down In Flames lay out scenarios in which the horn-dog singer’s ego takes a bruising) and always on the sniff for the next adventure, as detailed so memorably on the album’s title track.

Classic Rock once described Highway To Hell as “not just AC/DC’s greatest song, [but] the ultimate rock anthem, period” and the song is Bon as he’ll always be remembered – cocksure, rumbustious and ready to take on the world with a gap-toothed grin, come whatever may. It’s the sound of freedom, the sound of the world’s greatest rock ‘n’ roll band at their most feral and fearless. Highway To Hell is Bon Scott and his band at their most gloriously, thrillingly alive.