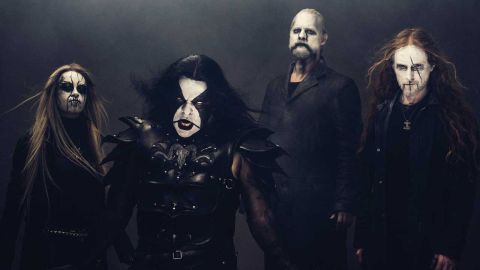 For fans of: Immortal, Venom, Darkthrone

When Immortal’s oft-memed leader, Abbath Doom Occulta, departed the band in early 2015, he took all the music that he had written for them with him, using it for his self-titled 2016 debut. It was plain to hear, as hooking anthems like To War and Winter Bane continued the groovy majesty of Abbath’s former venture.

So, as the first Abbath album written exclusively for Abbath, follow-up Outstrider is a very different beast. Admittedly, as it commences it sounds every bit as frostbitten as Immortal. Calm In Ire (Of Hurricane) begins the album with the ominous sound of wind blowing through Arctic tundra.

However, elsewhere, all bets are off. Bridge Of Spasms is a blitzkrieg of blackened thrash, powered by tremolo picking and a vocal delivery far speedier than anything Abbath attempted back when Demonaz was penning his lyrics. Hecate is a dissonant thunderstorm, where screeching riffs, pounding blastbeats and chilling atmospherics collide head-on.

If Outstrider is an exercise in Abbath venturing progressively further and further from his own well-established conventions, then Pace Till Death is the ideal closing chapter. It may start with a groove metal swagger, but it quickly explodes into a barrage of brutality. When the frontman belts out that eponymous refrain, it has all the violence and volume of a passing Formula 1 racer.

Simply, Outstrider is Abbath unbridled, simultaneously increasing not only the heaviness of this icon’s music, but also the diversity.

Outstrider is out now via Season of Mist, click here to grab it on vinyl.