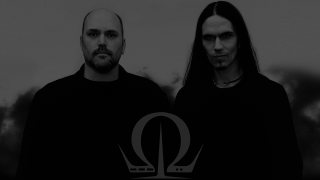 Following the indefinite hiatus of German avant-garde black metal band Todtgelichter, founder Tentakel P. set out to satisfy a musical and conceptual vision that would have been too dark and aggressive for his long-term project.

Enlisting Australian Prog Metal vocalist Xen of Ne Obliviscaris, the duo formed Omega Infinity – two words that "embody the unimaginable blackness beyond the known universe, the endless cycle of birth and death, of creation and destruction".

Channeling the raw energy of 90s black metal, Omega Infinity is packed with furious blastbeats and thunderous guitar riffs, but the conceptual arrangements transcend its black metal roots, invoking the ancient power of the cosmos and delving into the deep dark void of the universe.

Omega Infinity's debut album Solar Spectre is the start of an immersive journey through our solar system, which begins with debut single Mars, premiered below along with a 360° visualisation of the red planet to hurl you straight into outer space, while the music transfers the fury of the colossal planet into an entrancing composition.

"Red Master – Father of Fear – Bringer Of War. With the most primordial track dating back to the very beginning of Omega Infinity, Mars is raw, fast and dark and thus the perfect way for us to gather souls for the Void and herald things to come," the duo explain.

"The universe is a cold and harsh place, even on the very doorstep of humanity - Expect nothing less from our debut album. Join us in the Void!"

Solar Spectre is only the beginning of Omega Infinity's explorations into The Deep Dark Void. The debut album lands on March 27 via Season Of Mist.