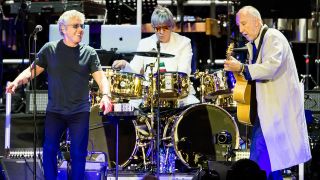 Last weekend, The Who played an epic set at London’s Wembley Stadium.

While the performance was crammed with fan favourites including Who Are You, Substitute, The Seeker, Behind Blue Eyes and Won’t Get Fooled Again, the band also debuted a brand new song in the shape of Hero Ground Zero.

Video footage of the performance has now appeared on YouTube and can be watched below.

Hero Ground Zero is expected to feature on The Who’s as-yet-untitled new studio album, which is expected to be released later this year – and their first since 2006’s Endless Wire.

Find The Who’s full setlist from Wembley Stadium below, which also featured another new song, Guantanamo, while Pearl Jam's Eddie Vedder also joined the band for Quadrophenia track The Punk And The Godfather.