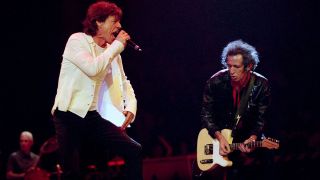 The Rolling Stones have released a video of their performance of Honky Tonk Women from 1999.

The clip has been selected from the band’s latest From The Vault release titled No Security: San Jose ’99. The DVD, Blu-ray, DVD/2CD and 3LP launched on Friday and captures the Stones as they toured the US on the back of their Bridges To Babylon album.

A statement reads: “No Security captures a stand-out Stones show, with the band on searing form during the closing leg of their American tour in San Jose.

“The setlist spans from the mid-60s hit singles to the Bridges To Babylon album, including a bluesy, dramatic version of Midnight Rambler, a dark and swaggering Out Of Control and the rarely performed live Some Girls and Saint Of Me.

“The show was an electrifying, anthem-packed, cross generational hot ticket, concluding yet another chapter from the band that wrote the book on rock‘n’roll.”

No Security: San Jose ’99 is now available to buy. Find further details below.

The Rolling Stones: No Security: San Jose ’99
Filmed in San Jose in 1999, this latest live release in the Stones’ From The Vault series is packed with classic tracks including Honky Tonk Women, Paint It Black, Start Me Up and Brown Sugar.View Deal