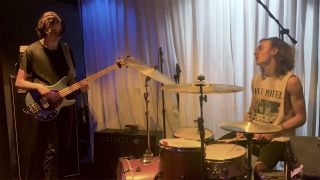 Earlier this week, Lars Ulrich was a guest of Salesforce chairman and CEO Marc Benioff, where the Metallica drummer talked about the possibility of recording new material from quarantine.

The drummer initially wanted to sign off from the interview by playing, but instead he asked his sons Layne and Myles to create something – and 30 minutes later, he found himself videoing their blistering take on the Beatles classic Eleanor Rigby.

“Obviously, there’s been some incredible versions of Eleanor Rigby along the way, but I’m pretty sure there’s never been one that had this kind of sound, this kind of feel, this kind of energy and madness to it. I was like, ‘You know what, boys? You done me proud.'”

He adds: “That’s me standing in the corner filming it, going, ‘Holy fuck!'”

Myles, who’s 21, has been playing drums for years and spent time at the famous Berklee College Of Music, while 18 year old Layne plays bass and guitar.

Check out their earth-shattering performance below.

Earlier this week, Metallica launched the latest episode of their Metallica Mondays series – and gave fans an update on the upcoming S&M2 album.