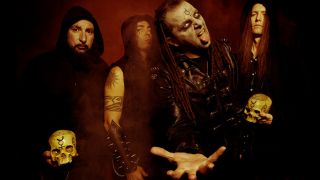 Having hosted the likes of Deicide and Obituary in the early 90s, The Dome in Tufnell Park, London is rooted deep in metal lore, and this Saturday it’s an apt host for Titanfest, a 17-band extravaganza dedicated to the undying spirit of the music we love.

Named after the The Underground Titans tour in 1992, Titanfest is a generation-spanning combination of seasoned metal heroes and new acts dedicated to the cause of UK metal, from M-Pire Of Evil, featuring Venom legend Mantas, through to resurrected thrashers Nightlord and The More I See, fronted by former Prodigy member Gizz Butt, to newer blood such as theatrical avatars of evil The Heretic Order and One Machine, a new, London-based band but with a rich pedigree of former Nevermore, Biomechanical and Mnemic members.

Starting at 12.30pm and running late into the night with DJs after the shows, Titanfest is a testament to the enduring power of old-school metal values, and old-school prices too, as tickets are a mere £20 + booking fee for the entire day.