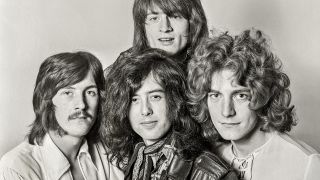 As the Stairway To Heaven legal case prepares to head back to court, Led Zeppelin have received the backing of the Trump administration.

Led Zeppelin were found not to have plagiarised Spirit’s 1967 track Taurus at the original court hearing back in 2016, in a case which centred around the descending chord sequence at the beginning of the 1971 Led Zeppelin song.

Lawyers representing the band subsequently lodged an appeal asking for a larger group of judges to rehear the case – and that request was granted, with a panel of 11 judges set to sit in San Francisco in September.

NBC News now report that the US Justice Department have submitted “friend of court” papers which say that the trial judge in 2016 was correct in his final decision. He ruled that at the time Spirit was recorded in 1967, it fell under an older law which only provided protection for the sheet music.

Congress changed the law in 1972 to also cover sound recordings.

Earlier this month, more than 100 artists pledged their support for Led Zeppelin, saying that ruling in favour of Michael Skidmore, who originally brought the case on behalf of late Spirit songwriter Randy California, would harm the creativity of “the music industry in general” and would cause “excessive and unwarranted litigation” in the future.

Skidmore’s attorney, Francis A. Malofiy rejected the artists’ filing saying: “The brief is unimpressive and dull. It represents 123 songwriters out of roughly 500,000 – a whopping .02%! It’s really nothing more than a blast piece for the industry.”

The case is scheduled to take place next month.