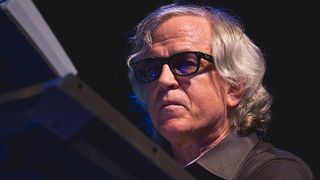 The keyboardist and composer first started working on the track Back To You, the first song he wrote for the album, in 1983.

Porcaro says: “I’ve always been writing and recording over the years, hoping to find homes for these songs with other artists.

“Lately, I’ve been reminded repeatedly how short life is, and I think it’s finally sinking in and with the encouragement of my band, family and fans, I decided it was time to remove my excuses, throw down, let go and finish these songs the way I hear them.”

The album features Porcaro on lead vocals for seven tracks and guest singers Michael McDonald on Swing Street and Night Of Our Own, Jamie Kimmett on She’s So Sky and Face Of A Girl, Michael Sherwood on Make Up and Mabvuto Carpenter on Painting By Numbers.

Someday/Somehow will be released on June 10 and can be pre-ordered via Toto’s official webstore.