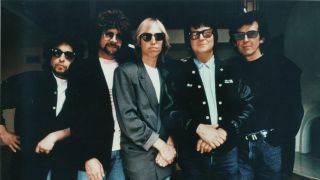 Tom Petty recalls short-lived supergroup The Traveling Wilburys as “a wonderful time” in his life.

It came about during a recording session for a B-side for Harrison’s single This Is Love, on which the Beatle roped in his friends. Petty only became involved when Harrison turned up at his house to pick up a guitar.

Petty decided to tag along to the studio, and ended up taking part in the session and joining the group.

But the song Handle With Care was deemed too good for a B-side and it later appeared on the Wilburys’ debut album Traveling Wilburys Vol. 1.

Petty tells HazyRock: “That extra track turned into the Traveling Wilburys. It was a wonderful time. I think the one thing I remember is, there was never a negative moment doing that. We really enjoyed that. I think we made that record for us, really. We just enjoyed it.

“Those 10 tracks were all we did. There’s not anything left over. And we did it pretty fast. We’d all sit on the floor in a circle, and write the songs. Then we’d go and cut the track. We’d have dinner, and work on the lyrics over dinner, and then go do the vocals — bang. I love all of those guys.”

The band recorded a follow-up – cheekily titled Traveling Wilburys Vol. 3 – in 1990, although they were missing Orbison who died in late 1988.