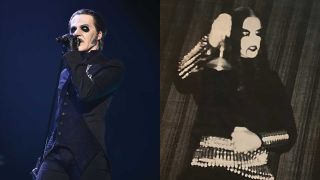 A photo has emerged of Ghost frontman Tobias Forge as a corpse-painted teenage black metal fan.

The photo, uncovered via Ghost Facebook fan page School Of Ghoul, shows a 15-year-old in 1998. Forge was a member of the band Superior at the time and called himself Don Juan Leviathan.

The picture originally featured in the fanzine Scriptures Of Malignancy and was accompanied by an interview with Forge, who talked about his previous bands, which included Malign and Absurdum.

According to the post, Superior recorded three demos, 1995s Anno Dracule (Dark Wampyrious Consipracy), 1996’s Metamorphosis and 1997’s Illustrare Ad Infernali, although only the latter two were ever released.

While Ghost’s fifth studio outing isn’t expected until 2021, Forge spoke about what fans could expect in a interview with Fansided.

The vocalist says: “I always say that each new album is like a reaction to each of the previous.

“Since Prequelle is not hard rock or heavy metal, the natural reaction to that will be to write something that isn’t – I don’t want to use the word ‘soft’ – it'll be different from Prequelle in the same way Prequelle was different from Meliora.

“I’ll write a record that we don’t have yet because otherwise what’s the point? But I definitely have an album in mind with slightly more riffage.”