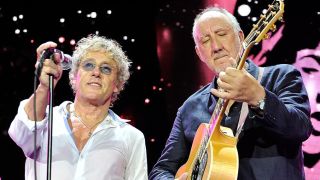 The Who will play London’s Hyde Park for the fourth and possibly final time next year.

Pete Townshend and Roger Daltrey have previously appeared three times in their own right, and once as part of the Live 8 charity show.

Now they’ve been confirmed as headliners at next year’s British Summer Time festival. They’ll appear on Friday, June 26, with special guests Paul Weller, Kaiser Chiefs and Johnny Marr, with more to be announced.

It’s to be the last date on their 50th anniversary tour, which hits the UK later this month. A final album could also be in the works.

Singer Daltrey says: “Hyde Park is always a good gig. It has nice grass, beautiful trees. I’ve got memories of doing it with a patch on my eye, holding my eye in. That was a nightmare – we had a quarter of a million people coming and I had a fractured cheekbone. How we ever did that show…”

Guitarist Townshend adds of their royal park show: “It’s a London crowd. You draw from all over the country, but a London crowd is a good crowd. So thank you, Your Majesty.”

British Summer Time tickets go on general sale at 9am on Thursday (November 20) with a presale the previous day.