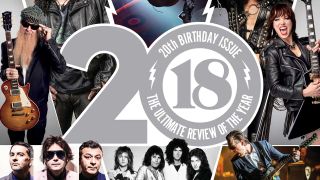 It’s been 20 years – 20 years! – since Classic Rock magazine was launched on the world. The mag has changed a great deal since that very first issue, but fundamentally it hasn’t changed at all; we still celebrate rock in all its wonderful guises and glory.

So welcome to our joint celebration of both Classic Rock’s 20th birthday and our traditional End Of Year review. We speak to many of the stars who featured in our very first issue, and see how things have changed for them over the past two decades.

2018 - The Year In Review
Another year over (just about), and again it’s one in which there have been fantastic new albums and lavish reissues released, small gigs and massive, bells-and-whistles live extravaganzas that have thrilled.

The Music That Shaped Our Lifetime
We look back at the records, artists and industry changes that have built the rock landscape around us since the magazine was launched.

Albums Of 2018
The past 12 months delivered plenty of new albums to get excited about, from both big names and newcomers. We present the Classic Rock critics’ choice of the best 50.

Gigs Of 2018
It was also a cracking year for quality live shows. We look back at some of our favourites.

Those We Lost In 2018
Gone, but not forgotten. Thank you for the music.

Plus...
A selection of stars look back over the past 12 months (and the last two decades) and tell us what it has meant to them, and what they are looking forward to in 2019. Including Slash, Nicko McBrain, Gene Simmons, Joey Tempest, Steve Hogarth, Ginger Wildheart, Scott Gorham, Mick Box and more…

Clutch
We caught up with the band whose Book Of Bad Decisions was voted the best album of 2018 in Classic Rock, to talk about Nothing, mosquitoes “the size of small birds” and the importance of humour.

Billy F Gibbons
Away from the arenas of ZZ Top, Billy and his band are taking it back to small clubs where they can see the audience’s eyes. And they’re absolutely loving it.

Guns N’ Roses
They recorded one of the best debut albums of all time, but Appetite could have turned out very differently.

The Year That Country Rocked
We get to the heart of why country rock is enjoying something of a revival, and talk to some of the new scene’s movers and shakers.

What’s on our end-of-year CD

The Dirt
Neil Young slams Trump as “unfit to lead” after US president’s California wildfire comments; Slayer to sign off at Download, with Smashing Pumpkins, Dream Theater and Anthrax also on bill; Bruce Dickinson says he would refuse an invitation from the Rock And Roll Hall Of Fame… Welcome back Zal Cleminson’s /Sin’Dogs/… say hello to The Wild Things, say goodbye to Tony Joe White, Hugh McDowell, Jimmy Farrar…

The Stories Behind The Songs: Foreigner
Mick Jones looks back on the single that steered the band out of a difficult time – ‘power-dressed’ production and sax solo included.

Q&A: James Dean Bradfield
The Manic Street Preachers frontman on fame, hecklers and getting beaten to No.1 by the “fucking Greatest Showman”.

Buyer’s Guide: REO Speedwgon
The best from the Illinois rockers who in the golden age of AOR had hits that have gone down in power-ballad history.

Live Previews
Must-see gigs from Wolfsbane, Sweet, Magnum and Dave Peacock. Plus full gig listings – find out who’s playing where and when.

The Soundtrack Of My Life: Joe Elliott
The Def Leppard frontman enthuses about the special records, artists and gigs that will forever be of lasting significance to him.