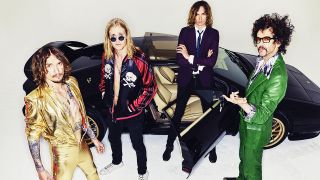 The Darkness have been confirmed as one of next year’s Ramblin’ Man Fair headliners.

The UK festival will take place at Mote Park in Maidstone, Kent, between July 19-21, 2019, with The Darkness closing out the Friday night’s entertainment on the main stage.

Vocalist and guitarist Justin Hawkins says: “I do love to ramble. Years ago, my grandfather bought me a set of hiking boots for Christmas, in a direct refusal to spend money on the plastic Evel Knievel toy I had begged him for in the weeks leading up to it.

“Grandad was quite progressive in that respect, very much a recycler. It must run in the family, my Uncle Len gave me the same three-pack of sports socks that I had given him the previous year.

“So off I went, box-fresh hikers and re-gifted sports socks up the nearest hill. It took a long time to get there on account of my having grown up in the flat lands of East Anglia.

“Two of my other great uncles, Fred and Cyril, lived in Maidstone so I walked there. That makes Ramblin’ Man somewhat of a homecoming, and we, The Darkness, cannot wait to headline this magnificent festival.”

It’s also been announced today that the Chris Robinson Brotherhood will also play on the main stage at the UK’s festival of rock, prog, country and blues.

Other artists also previously confirmed were Pain Of Salvation and Riverside.

For more on Ramblin' Man Fair 2019, visit the official website.