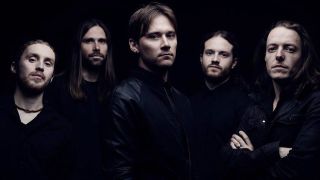 TesseracT frontman Dan Tompkins says his decision to turn his back on a career in the police to work as a musician full-time has not paid off financially,

Admitting he has nowhere near the kind of cash he had when he was pounding the beat, Tompkins opens up about the hardships of life in a band in the latest issue of Metal Hammer.

He says: “I’m not lying when I say I’ve got £100 in my bank account right now. In the six years I’ve been doing this, I’m not anywhere near the wage that I used to be on when I was a copper.”

Tompkins reveals the band’s single Survival is about the difficulties bands face to break even and keep their heads above water in the industry.

He adds: “It’s been a massive struggle. A struggle for survival.”

Read the full interview in the new issue of Metal Hammer magazine, available now in print, digital and via TeamRock+.