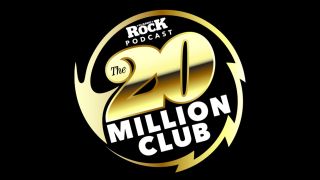 The team behind Classic Rock magazine have launched a new podcast series titled The 20 Million Club.

Hosted by British broadcasting legend Nicky Horne, The 20 Million Club also features guests appearances from the Classic Rock team, with every episode exploring one of the biggest-selling rock albums of all time.

Future’s music content director Scott Rowley says: “Prepare for the best-selling albums of all time to be re-evaluated, celebrated and occasionally eviscerated as we ask: What's so good about them? What are the greatest tracks and which could you live without? What would you change about the record? Who comes out of the album best? And of course: why did they sell so many?

“It's a show about the greatest albums of all time, but with added piss-taking.”

The first episode in now available and sees Nicky, Scott and Classic Rock editor Sian Llewellyn discuss AC/DC’s Back In Black, which is of course, celebrating its 40th anniversary this month.

The 20 Million Club say: “AC/DC’s seventh album was released on July 25, 1980. Their first with singer Brian Johnson, it came out just months after the death of Bon Scott.

“Housed in a plain black sleeve, with a new singer and a tragic back story, Back In Black went on to sell more than 50 million copies worldwide to become the best-selling rock album of all-time. But c'mon: is it that good?”

The 20 Million Club by Classic Rock magazine can be listened to right now on Apple Podcasts and Spotify. Make sure you subscribe so you'll never miss and episode.