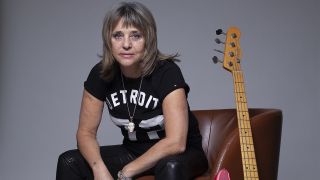 Suzi Quatro says Liam Firmager’s documentary about her life and career is “everything I wanted it to be.”

Suzi Q received its North American premiere last night, with the event taking place online due to the ongoing lockdown. And speaking with Cleveland.com, Quatro has revealed what it’s been like looking back over her career, picked out highlights from the film and also revealed her future plans.

Quatro says: “It's great. The movie is everything I wanted it to be. There's maybe nothing I didn't know, but it cemented some things. The movie is exposing. I saw that I'm very, very determined.

“Everybody's always told me that and I never quite noticed it, but boy, am I determined! And I'm tough because I walked through the fire and I survived. But I'm very soft, too. I'm not afraid to hurt.

“So, I'm a real dichotomy of things. I hope people will think they know me. I'd like to be understood.”

Suzi Q also features interviews with a range artists including Joan Jett, Cherie Currie and Debbie Harry, who talk about the pioneering Detroit-born vocalist, bassist and songwriter, who became the first female rocker to break into the mainstream in the 70s.

Asked how their contributions to the film made her feel, Quatro says: “It’s humbling. When people say nice things it makes you cry because you go, “Oh my god, they think that?' I didn’t know how much I meant to everybody.

“That surprised me. I knew I was the first one and a lot of women came after and they’ve thanked me for it, but I didn’t know how these girls held me in their hearts. I somehow, without meaning to, gave them permission to be who they are.”

Quatro says she’s been working on various projects during the lockdown, revealing she’s demoed 14 new songs and has an illustrated book of lyrics at the publishers.

She adds: “And because Suzi Q is getting such rave reviews, I’m going to do a biopic about my life.

“We’re just finishing up the script. I’ve got people in mind to play the lead. I don’t want to say anything yet, but the money’s in place and the movie will be made, and it’s on my bucket list.

Suzi Q will be officially released on Video On Demand and DVD tomorrow (July 3).