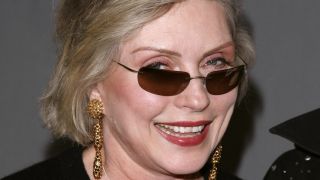 For more than 30 years, Debbie Harry has been the voice and the iconic face of New York new wavers Blondie, with whom she had a raft of era-defining hit singles in the 80s. The 63-year-old former Playboy Bunny still plays and records with a new line-up of Blondie that includes two other original members, as well as having a solo career and, among other things, making occasional appearances with the Jazz Passengers. Her new solo album, Necessary Evil, is out now on Universal.

Debbie or Deborah – which one would you rather be called these days?

Oh, I don’t care. Ha ha! I think I sign formal things with ‘Deborah’ because that’s my birth certificate name, my passport.

Since Blondie re-formed in the late 1990s you’ve toured and recorded again every few years. Does it feel like the same band as it did in the 1970s and 80s?

I think the material makes it seem connected somehow, but the band from the early 1980s and the band we have today are much different. Basically we have three original people – Chris [Stein], myself and Clem [Burke] – and then we have three guys who we’ve been working with for about 10 years now.

Has touring got easier or more difficult as you’ve got older?

It’s a lot easier. Back in the 1970s a lot of things were hit-and-miss technically, and promoters were overnight sensations; it was more of a Wild West kind of business. But now the industry has gotten very sophisticated. You get paid properly, and you also get much better equipment, better working conditions, everything is very well organised.

Blondie were finally inducted into the Rock And Roll Hall of Fame last year. Did that mean anything to you?

Yeah, it really did. It sort of made me feel like what we had done was legitimate.

You were already over 30 years old by the time Blondie became successful. How did stardom affect you?

People these days become famous so young. I was probably keen to be famous when I was that age too, but fame meant something else to me – it meant getting a sense of worth or satisfaction or completion of some sort. That’s what I thought it would be, but I was mistaken. Really it was just a lot of work, trying to keep up.

Is it better to find fame a little later in life, when you’re more able to handle it?

Everybody has a different character, nobody has the same calendar or time clock or whatever. Everybody has their own schedule when they are ready to tackle some kind of achievement. With some people it happens at an early age, and some people older.

I was just reading the biography of Colonel Sanders, who started Kentucky Fried Chicken. This is a guy who had a terrific philosophy of life. He did a lot of odd jobs up until he reached his 60s, then after he reached retirement age he became world-famous as Colonel Sanders. This whole idea that everybody has a schedule to follow that’s the same as everybody else’s is a big mistake.

Your have a new solo album, Necessary Evil. What can you tell us about it?

I haven’t done a solo album in a number of years. We did the two Blondie albums, No Exit and The Curse Of Blondie, and I just felt the urge to do some solo work, having not done any for a long time. It’s really fun, very personal, I had a good time doing it. It’s definitely a personal voice speaking. I’ve done a couple of pieces with Chris Stein, of course, then I did the majority of the pieces with a production team called Super Buddha, and one piece with my friends from the Jazz Passengers.

You still perform with the Jazz Passengers occasionally. Are you more comfortable with jazz than rock these days?

No, absolutely not. I love doing what I do. I think I’m very rock’n’roll. I did a set with them a couple of months ago, which was a terrific experience, as ever. Every once in a while I join them. I like working with these jazz guys because they’re terrific musicians and it’s challenging for me, but I’m definitely a rock’n’roll person.

You hung out with a very druggy crowd in late-70s New York, and you have been very open about your own drug use. What’s your attitude to drugs today?

The drug experience was edifying and illuminating, but the other side is that it was habitual and destroys brain cells. When you do drugs you’re open to all that experience, and I had all that experience. Did I have a drug of choice? Well, I chose a lot of drugs. I’m not a person who will ever say to a younger person: don’t take drugs. I can only speak from my own experience.

Blondie split for the first time in the mid-80s after you nursed Chris Stein through a serious illness. It also led to the end of yours and Chris’s relationship. What are your memories of that time?

It was a difficult period. We actually should have gone into therapy or counselling and maybe we would have weathered that storm. We were both really pressed to the limit. Chris was sick but I was ill too. We worked very hard for a long time without any breaks, and I think I was probably having some minor nervous breakdown. I certainly was not dealing with a full deck.

Your private life seems shrouded in secrecy these days. Will you talk about it?

My private life is pretty much my public life. My downtime I spend with friends. Occasionally I have a date, which I really don’t like to admit to.

Do you still listen to a lot of new music? Do you go out and see bands in New York?

I don’t listen to a hell of a lot because I think it sometimes interferes with creativity. I don’t have music on all the time but I like to hear what’s out there. I like to go out and see who’s playing, but I don’t have a list of favourite bands.

You’ve spent most of your life in New York. Have you ever considered living somewhere else?

Well… I don’t know. I always consider going different places, but I travel so much that I feel like I see a lot of different places anyway. Home is where the heart is. New York is where a lot of my friends are, and I have small family ties on the East Coast. The world is a small place now, travel is not really a big deal. I guess if I was to fall madly in love with some Spaniard I would consider moving to Spain. You never know, right?

Blondie’s Debbie Harry and Chris Stein were one of the last acts to play at the legendary New York venue CBGB, where Blondie cut their teeth, before it closed in October 2006.

“At first I didn’t really give a flying fuck,” she says. “But CBGB was a kind of institution and a worldwide name. So then I did a couple of benefits in the club itself, with a few bands. It was very moving. I didn’t think I’d feel as nostalgic as I did. I felt: ‘Oh God, I really did have some great times here.’ Difficult as those times were, it was a great experience.”