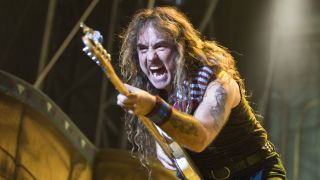 A week or so ago we posed a question to Metal Hammer readers – who is the greatest bassist of all time? And in your thousands you voted. But there was one clear winner…

“He’s been the driving force behind the greatest metal band of all time for more than 35 years. He’s an icon, a hero and a living testament to the power of ambition, determination and humility. But more important than that, Steve Harris is an absolute beast of a bass player. There are undoubtedly more technically gifted bassists in the rock world, but the sounds Steve conjures from four strings provides Maiden with a precise and propulsive backbone; that unmistakable, clattering pulse, as essential to the band’s music as Bruce Dickinson’s voice or those seminal twin guitar harmonies. Throw in the fact that H is also a truly great songwriter and it’s not hard to see how he topped our poll. The image of Steve Harris, foot on monitor and Fender Precision aimed, machine-gun style, at the first few rows of baying acolytes is simply the visual essence of Iron Fucking Maiden. And furthermore, how the fuck do his fingers move that fast? Steve’s playing style is so unique that, surprisingly, it has never been credibly emulated by anyone. Perhaps metal musicians just instinctively know that you don’t mess with the master.”

The top ten as voted for by you is as follows: