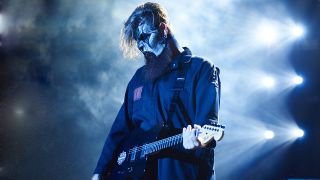 The guitarist revealed his plans to Loudwire, saying he was turning his attention to something different due to the current lockdown.

He said: “Now that we have this pandemic going on, I’ve been trying to force myself to write. A lot of people ask me about doing a solo project and I think now that I have a little bit of extra time to dedicate to that, I’ve been writing some stuff that maybe wouldn’t slide in with the Slipknot world.

“I know Corey Taylor wants to do a solo project that’s outside of Stone Sour – he’s mentioned that. Unless I’m writing for Slipknot, I wouldn’t know what to do with my time.”

Root adds: “There’s a lot of different philosophies and ideas and things we’re throwing around with Slipknot with another record. It’s easy for me to write Slipknot arrangements – they come naturally… but for a solo project, I’m going to overthink that until I’m insane and that’ll mean it might never come out.”

Root says he’s unsure of what direction the music will take, and adds: “But I’m going to try – set a goal and maybe see if I can achieve it. We’ve got time on our hands now.”

In November last year, Taylor revealed he had 26 songs written for a solo album and last month it was reported that he was working on a mystery project with his wife Alicia.

Last week, the BBC made their hour-long Slipknot documentary Unmasked: All Out Life available to view around the world.