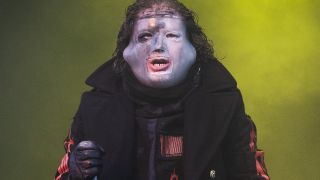 Corey Taylor has spoken about the time Slipknot supported a jazz band in Des Moines, Iowa.

The gig in question happened in Slipknot’s early days, with Taylor setting the scene while talking with BBC Radio 1’s Daniel P Carter.

Taylor says (via NME): “It was a gig-trade because Clown owned a bar in Des Moines. They all stared at us like we had shit in our hands and had thrown it at them. They were so stunned with the madness.”

And if the band thought things were tough at the gig, things were about to get even worse.

Last week, Taylor said he had written 26 tracks for his new solo album, while Slipknot recently announced their very own music cruise in the shape of Knotfest At Sea.

It’ll depart from Barcelona on August 10 and return to port four days later. Slipknot will play two sets onboard the ship, with additional artists and high seas experiences set to be revealed in due course.

Slipknot are currently on the road across South America and will return to the UK and Europe in early 2020.