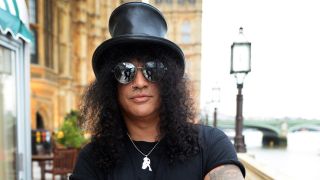 Slash says he blames the media for creating tension between him and his former Guns N' Roses bandmates.

The guitarist has not spoken to Axl Rose since leaving the band in 1996. Slash later said it became impossible to work with the frontman, who he described as a “dictator.”

Rose famously went on to describe Slash as “a cancer” during a 2009 interview.

Now Slash says he is sick of the press trying to stir up conflict between himself and Rose.

He tells the Irish Examiner: “I’m not bored with the fascination with Guns N’ Roses. What I’m bored with is all the brouhaha with stuff the media have no idea what they are talking about – the causing of unnecessary conflict between the original members. It’s just a lot of drama and sensationalism. Everyone is trying to capitalise on that. I’m sick of it.”

Rose remains the only original member of Guns N’ Roses while Slash will release his new album World On Fire via a Classic Rock magazine fan pack on September 15.