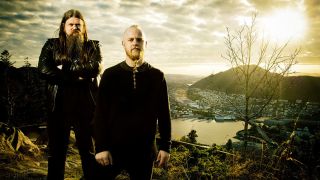 Skuggsja, the project featuring Enslaved’s Ivar Bjornson and Wardruna’s Einar Selvik, have streamed their self-titled debut album in full ahead of its official launch.

It’s set for release on March 11 via Season Of Mist – and Bjornson reports making the concept record with Selvik was an “amazing” experience.

He says: “Turning the live piece Skuggsja into an album has been an amazing journey. I am privileged to have made it alongside Einar and the team that has helped us fulfil our common vision.

“I am immensely proud of the conceptual and musical story we have made. It has become something more than the sum of the pieces added together – that alone feels like an achievement.”

Selvik adds: “There are many things I could say about the album and its diverse material, but in the end I think it is best to let the music speak for itself.

“Writing these songs together with Ivar has truly been a highly inspirational and fruitful journey for me and I can only hope that it comes across and is notably reflected in the music also.”

Skuggsja is available for pre-order via Season Of Mist’s online store.

Skuggsja will perform at the Metal Hammer and Prog-sponsored London By Norse 2016 on March 17-20.