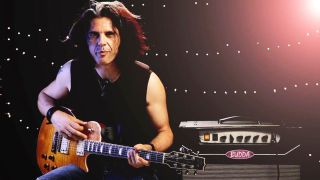 Alex Skolnick says he’s loving the responsibility of being the main guitar focus in Metal Allegiance.

The supergroup will issue their self-titled debut album on September 18 via Nuclear Blast, with Testament man Skolnick on lead guitar duty, while Mike Portnoy handles drums and Megadeth’s David Ellefson is on bass. A string of guest vocalists and musicians appear on the record.

Skolnick tells Planet Mosh: “I enjoy being part of a guitar team in Testament, but I’m also somebody who you can give the whole track to and I’ll make it happen. I kind of enjoy being in the foundation as well.

“People have heard me outside Testament, doing very different music. I’ve done several jazz guitar albums, and I just did an acoustic album with Planetary Coalition with some of the top world artists.

“So people have heard me play instrumental music that’s very different, with musicians that aren’t metal musicians. But nobody has heard me play like this. A lot of it is one guitar.”

The band came together last year as a last-minute replacement for Megadeth on Motorhead’s Motorboat cruise.

Skolnick adds: “It all happened really fast and I wasn’t sure what to expect. But we got together over Christmas at Mike Portnoy’s house, and we put our ideas together and bonded over our favourite albums.

“We played it for a few people, and there was instantly industry interest.”

The album is now available to pre-order from Nuclear Blast’s online store. The Digipak edition features a cover of Dio’s We Rock along with a behind-the-scenes documentary.