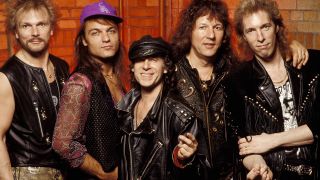 Scorpions frontman Klaus Meine has denied the theory that their smash hit single Wind Of Change was written by the CIA.

The song was written in 1989 and went on to top the charts across Europe when it was released in 1991 – shortly after the fall of the Berlin Wall, becoming an anthem of the times amid the shift in the cultural landscape.

Shortly after it was released, the Soviet Union fell, with the New Yorker magazine’s Patrick Radden Keefe delving into the rumours that the song was actually written by the CIA to insert into the Soviet Union to force the pace of change in his new podcast series, also titled Wind Of Change.

And in the latest episode, the investigative journalist sat down with Meine to discuss the track that the Scorpions vocalist wrote on September 3 and 4, 1989.

When asked if there was any truth to the rumour, Meine denies it, saying he’s never heard the story before, but adds: “If the CIA had a song and put it out behind the Iron Curtain, that would make sense. It’s a little weird when you think about it, but on the other side, it underlines the power of music in a big way.

“It infiltrates and all of a sudden half of Russia is whistling Wind Of Change and they don't know why."

He adds: “After all these year, to hear a story like this is really something. I’ve heard stories connected with Wind Of Change, but the CIA?

“Its an interesting story, definitely. It's a good idea for a movie. That would be cool."

Check out all eight episodes of the Wind Of Change podcast here.

Last month, Scorpions released a new ballad titled Sign Of Hope which was recorded during studio sessions in Los Angeles.