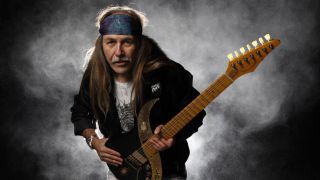 The German guitarist issues Scorpions Revisited on March 10 via UDR and he describes the project as “an intense journey into the past” which “really managed to bring the songs back to life with a vengeance.”

It features tracks originally recorded during Roth’s spell with the band in the 1970s.

Roth says: “The material for this double CD was recorded last year in the same hall in Hanover that we used for the Scorpions rehearsals between 1973 and 1978.

“Together with an amazing bunch of very talented young musicians, I revisited my personal favourites from the early Scorpions period. It was an emotional few days and I am very pleased with the results in more ways than one.

“The idea was to stay truthful to the original spirit of the music, while also putting a new slant on it whenever it felt like the right thing to do. I feel we really succeeded in this and I’m very excited about this project.”

The current Scorpions lineup last year went back on plans to call it a day, saying their supposed ‘final tour’ was too much fun to consider quitting. They’ll co-headline this summer’s TeamRock-sponsored Ramblin’ Man Fair which takes place on the weekend of July 25-26 in Kent.