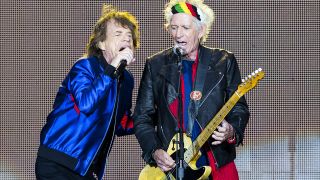 The long-running copyright dispute between the Rolling Stones and The Verve’s Richard Ashcroft is over.

The two camps became embroiled in a legal spat through The Verve’s 1997 track Bitter Sweet Symphony, which featured a string sample of Andrew Loog Oldham’s orchestral version of the Stones’ The Last Time.

A subsequent lawsuit brought by former Stones manager Allen Klein forced Ashcroft to pass on 100% of the royalties from the song to Mick Jagger and Keith Richards.

However, it’s emerged that Ashcroft recently appealed to the Rolling Stones duo directly, with the pair “unhesitatingly and unconditionally” agreeing to deal with the situation and hand the songwriting credit back to Ashcroft.

"By the time the mistake was realised, a huge number of copies of the Urban Hymns album had been manufactured around the world and the record company were reluctant to scrap them.

“They were confident they would be able to do a deal with the publishers and convinced Richard to allow the release of the album as it stood. However Mr Allen Klein, the owner of ABKCO, was very protective of his copyright and the only deal that he was prepared to do involved Richard effectively signing away all of his rights in one of his most iconic songs including the total lyrical content.

“Of course there was a huge financial cost, but any songwriter will know that there is a huge emotional price greater than the money in having to surrender the composition of one of your own songs. Richard has endured that loss for many years.”

Responding to the news as he picked up an Ivor Novello award for Outstanding Contribution To British Music, Ashcroft said: “This remarkable and life-affirming turn of events was made possible by a kind and magnanimous gesture from Mick and Keith, who have also agreed that they are happy for the writing credit to exclude their names and all their royalties derived from the song they will now pass to me.”

Bitter Sweet Symphony was closely associated with the mid-90s Britpop era and picked up several awards and was nominated for many more – including a Grammy in the Best Rock Song category.