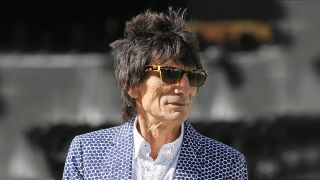 Rolling Stones man Ronnie Wood says his biggest regret is not being able to remember all the girls he’s been with in his career.

Years of heavy drinking have taken a toll on his memory – and he only knows about some of the things he’s done because he found a diary from 1965, which was recently published.

Wood tells NME: “One regret I have, going back through this diary, is that I can’t remember what a lot of my girlfriends looked like years ago.

“I don’t regret the drinking. I drank for Britain until I got sober five years ago. That was a learning curve I had to go through – but not remembering the wonderful girls is a regret.”

The memoir has helped him recall nights out with comedy icon Sid James and soul hero Wilson Pickett. “In The Midnight Hour was the biggest record there was for me,” Wood says, “But I’d forgotten all about our adventure together until I picked up the diary.”

The Faces and Jeff Beck Group guitarist joined the Stones in 1975, but recalls he was determined to win the role, even at the time he was writing daily records.

Wood says: “I was going to be in that band one way or another, and I would broadcast the fact. I thought it looked like a good job – and it turns out that it is.

“It goes to show you can set your sights on something and get it, if you think big and put in the work.”

A Faces reunion remains a possibility, although Wood recently said it was being held up by the financial requirements of singer Rod Stewart’s management. The Stones launch a US tour on May 24. Wood’s diary, How Can It Be? is available as a limited-edition signed title costing £295.