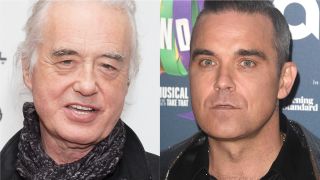 The long-running feud between warring neighbours Jimmy Page and Robbie Williams seems have been reignited, according to claims by a local resident.

The pair have been at loggerheads since 2015 over Williams’ plans to build a swimming pool in the basement of his west London home. Page has long argued that if that went ahead, it could have “catastrophic consequences” for the integrity of his home – a Grade 1 listed building which is situated just 13 meters away.

The situation appeared to have reached a conclusion just last month when Kensington and Chelsea Council gave Williams the green light to proceed, with chairman councillor Quentin Marshall also urging the pair to put their differences aside and talk.

At the time, a spokesman for Page said that the guitarist would be happy to meet Williams – but new claims by a local resident, known only as Johnny, make it clear that an amicable resolution could be some way off.

According to The Telegraph, Johnny sent a letter to the council alleging that Williams has been up to several bizarre antics, including playing loud rock music on outside speakers whenever he sees Page.

According to the website, the letter says: “The committee may not have been aware that Robbie Williams has been playing loud 70s rock music on outside speakers when he views Jimmy Page outside his home.

"There have also been some reports that Robbie Williams has dressed up to imitate iconic Led Zeppelin frontman and lead singer Robert Plant.”

The Independent say that involved “wearing a long wig and stuffing a pillow up his shirt.”

A spokesperson for Williams has told The Telegraph that the allegations were “a complete fabrication and nonsense.”

Although the pop star was given permission to have the pool built, he can’t begin until the council receives assurances about ground movement and vibration levels, with a further meeting set to discuss asking Williams for a bond which could be forfeited if any damage occurs to Page’s property.