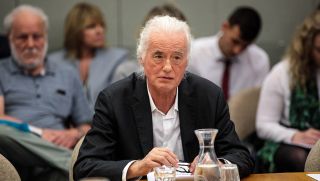 The long-running dispute between neighbours Jimmy Page and pop star Robbie Williams appears to be over.

The pair have been at loggerheads since 2015 over Williams’ plans to build a swimming pool in his basement. Page has long argued that if that went ahead, it could have “catastrophic consequences” for the integrity of his home – a Grade 1 listed building which is situated 13 meters away.

Kensington and Chelsea Council deferred a decision on the matter back in May, but Williams’ plans were given the green light by the council yesterday, with chairman councillor Quentin Marshall urging the pair to put their differences aside and talk.

Work cannot begin until the council receives assurances about ground movement and vibration levels and there will be a further meeting to discuss asking Williams for a bond which could be forfeited if any damage occurs to Page’s property.

It’s also reported that planning permission for the swimming pool is subject to a legal agreement, with a planning applications committee convening in 2019 to discuss the issue.

Following yesterday’s meeting, a spokesman for Page said that the guitarist would be happy to meet Williams, adding: “From Jimmy's point of view, he will be reassured that the committee of councillors are taking the protection of the house seriously.

“He wants Robbie to come back with proposals that eliminate all risk to the Tower House.”

In September 2016, Williams reignited the feud between him and Page when he performed Led Zeppelin’s Whole Lotta Love at at the Apple Music Festival and changed the lyrics, singing: “I’m gonna dig a big hole and fill it full of shit,” before segueing into his own track Kids.