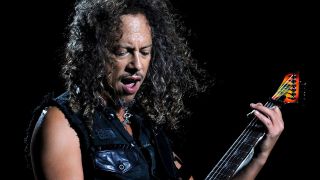 Topping our poll of Riffs That Shook The World – as voted for by you – is the legendary Creeping Death by Metallica.

What is it that hits you hardest about Creeping Death? Take a second to think about it, because this thrash metal journey has plenty going for it. Is it that thunderous, thudding introduction that shoots adrenaline through your veins, getting straight to the point and setting the riotous tone from the very first note of the song? Maybe it’s that middle section that slugs away like body blows from a heavyweight boxer and includes what could very well be the most definitive gang vocal ever recorded? The epic scale and tone of the guitar solos? The dual guitar moments that added a sophistication and element of class to the “hunt and kill” rhetoric thrash had made its forte by 1984?

Whatever it was, it was apparent upon the release of Ride The Lightning that Creeping Death was unchartered territory for both Metallica and metal as a whole.

“Creeping Death was one of the first songs responsible for the musical growth of the band, I think,” reflects Kirk Hammett. “It was one of the first songs written for Ride The Lightning and it was a clear step in the right direction. It was as heavy as anything on Kill ‘Em All but on a technical level, we had put that much more into the writing and arrangement and we made it more demanding for ourselves, and it set the stage for therest of the album.”

Though the song obviously goes down as a Metallica classic, dig a little deeper and you can find that Hammett’s former band Exodus had a tiny part to play in the creation of this metal masterpiece…

“James and Lars hammered that song out in a day and then called me down to the rehearsal space,” Kirk reveals of the song’s origin. “They got to the ‘Die by my hand’ riff and they started grinning at me and I laughed because I’d had that riff kicking around for so long and we’d used it in an Exodus demo, but it just worked in Creeping Death so well. I wrote it when I was 16 years old, definitely still in high school, and I remember thinking, ‘Wow, this is heavier than a lot of the bands that I listen to,’ and thought I’d touched upon something. It was the first riff I ever wrote that was in that sphere and I’ll always have tremendous affinity with it for that reason.”

It’s perhaps in the live setting that Creeping Death has solidified its reputation as owning one of the biggest riffs in the history of metal. From sweaty clubs in the mid-80s to the stadiums and festival headline slots they occupy today, Creeping Death is second only to Master Of Puppets in the Metallica canon for most live airings ever, and is regularly deployed to open the band’s live set. Indeed, after a weekend of Glastonbury coverage that involved insipid pig vomit like Ed Sheeran and Arcade Fire, Creeping Death opening Metallica’s setlist on the main stage felt like a bazooka being fired at a hippie commune.

“Mission accomplished, then!” laughs Kirk. “It’s a song that pulls you in from the very beginning and we open with it for that reason. You don’t have to build yourself up; from the first second it pulls you in and the set goes from there.”

Perhaps the most impressive thing about the track is that it still sounds so crushingly heavy a full 30 years after its release. When you consider how dated some things from as recent as the late 90s and early noughties sound (have you listened to Soulfly, Drowning Pool or Static-X lately?), that Creeping Death still sounds like a Michael Bay scene set in Hell tells its own story.

“I can only speculate, but I think one of the things that makes it so timeless is that it sounded like nothing else that was going on at that time,” summarises Kirk. “It didn’t have anything to do with any of the trends that were going on. It didn’t sound anything like what would become hair metal and it only had elements of what was going on in thrash and when you can’t tie a song or a sound to a particular point in time, it means you can’t date it and that’s probably why people would say it’s stood the test of time so well. I’m proud of that.”

Find out more on the Riffs That Shook The World and the guitarists who wrote them in the latest issue of Metal Hammer here.