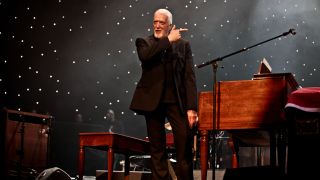 “Jon Lord is one of the greatest keyboard players there has ever been. He’s not really considered a prog rock musician, but he did things that nobody else did. When you look at early Deep Purple especially, there was a lot of prog in there – they were breaking rules. Jon did things that you ‘shouldn’t’ – in inverted commas – do on in the context of a rock band. If that’s not progressive, I don’t know what is.

"I bought Shades Of Deep Purple, the very first album by the original Deep Purple line-up, back when it came out. What I really loved about that album was that they did a version of The Beatles’ Help! on there, where Jon did amazing things on the Hammond and Leslie. I thought, ‘I like this guy’, so I always kept an eye on what he was doing.

"Like Keith Emerson, Jon had such had such an identifiable sound, one that nobody else could play. He worked hard on his Hammond to get new noises out of it. And the only way to do that was to continually experiment.

"Jon could have been whatever he wanted to be. He loved playing in a rock band, and he had a phenomenal feel for solos – listen to a song like Speed King. But he also had a classical edge to him. Ian Paice, the drummer from Deep Purple, once told me that no one else in the band knew what was going on with the Concerto For Group And Orchestra thing they did, because it was all in Jon’s head.

"I first met Jon very briefly donkey’s years ago, back in the 70s and the days of the Melody Maker poll awards, but our bands were always on the road or in the studio in different places so we never really got a chance to talk. Then about seven or eight years ago, I was round at Ian’s house and Jon was there – they were married to twins, Jacky and Vicky. The girls were talking and Ian was off doing something else, and Jon and I ended up having a chit-chat about what we wanted to do. Five hours later, it’s three in the morning and we’re still talking. Ian popped his head in and said, ‘I didn’t want to disturb you, because you looked so engrossed.’ We became great friends after that.

"I only got to play with him onstage once, which was at the Sunflower Jam charity gig at the Albert Hall in 2011. Vicky, who organises it, said, ‘You two can do something together’, and you just don’t argue with her. We met up in a rehearsal room a few days before the concert and started to think about what we were going to do. We decided he’d deal with the organ and piano and I’d deal with the synth side of things. Jon had this intro piece, which I loved, and I had this other piece, and we built it from there. After four or five hours, we had this thing that we knew really worked. My keyboard tech told me it was the most magical moment of his life.

"That led us to the idea of doing an album of completely new material together. We were serious about it. It got to the point where we’d arranged to sit down in a couple of weeks to properly work it all out, when he called me: ‘Look, I’ve been to the doctors and they’ve told me I’ve got pancreatic cancer. I feel good, but do you mind if we put things on hold until we get this sorted out?’ And of course, sadly that never happened.

"The thing about Jon is that he was a true gentleman, and he had a wicked sense of humour. At one Deep Purple gig, he introduced the rest of the band, and then he introduced himself: ‘I’m Rick Emerson.’ I think one of the hardest decisions he made was leaving Purple. I asked him about it and he said, ‘I had to leave because there are so many things I want to do.’ I knew what he meant. It was the same for me in Yes.

"He was the one who inspired me to remake Journey To The Centre Of The Earth – he once told me that he didn’t want to leave behind something that wasn’t what he wanted it to be, and that was what happened with that album for me originally. When I was driving back from his memorial, that’s when I made the decision to redo it and put in all the bits I had to leave out. I told my wife, and she said: ‘Why do you want to do it?’ And I said, ‘Because Jon Lord was absolutely right when he said that.’ And that’s why there’s a dedication to him on that album."