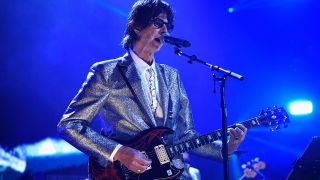 The family of Ric Ocasek have issued a statement in light of The Cars’ vocalist and guitarist’s death earlier this week.

Ocasek died at his home in Manhattan on Sunday at the age of 75, with police confirming there had been no signs of foul play. No cause of death has been revealed, with the family statement saying Ocasek had been resting after undergoing recent surgery.

It reads: “Ric was at home recuperating very well after surgery. Our two sons, Jonathan and Oliver, and I were making sure he was comfortable, ordering food and watching TV together.

“I found him still asleep when bringing him his Sunday morning coffee. I touched his cheek to rouse him. It was then I realised that during the night he had peacefully passed on.”

The family add: “We appreciate the great outpouring of love. We, his family and friends, are completely and utterly devastated by his untimely and unexpected death and would appreciate the privacy to mourn in private.”

Jonathan and Oliver have also shared their thoughts along with a picture of some of their father's doodles.

The brothers say: “Our dad was a prolific doodler. His passing was sudden, unexpected, and beyond heartbreaking. Yesterday, we found this last doodle on his armchair. He couldn’t have known what it would end up meaning to us. We love him so much.”

Further tributes have been flooding in through social media to the artist and producer, with Red Hot Chili Peppers’ bassist Flea calling Ocasek an “interesting, smart, kind, funny man who made incredible records.”

Ahh man, say it ain’t so. I loved Ric Ocasek. What an interesting, smart, kind, funny man who made incredible records. I loved those Cars albums when I was a teenager. Perfect pop songs with those wicked elliot… https://t.co/SjtRU8OaJOSeptember 16, 2019

So sad to hear that we have lost another one. Ran into Ric on the streets of NYC last year and we had a nice chat. Just two guys/no fanfare. I’ll always remember it. #RIPRickOcasekSeptember 16, 2019

RIP Ric Ocasek. A very sad loss. My condolences to his family. https://t.co/0KXmMC0qEiSeptember 16, 2019

Devastated to hear of the passing on this man, Ric Ocasek. It has brightened my spirit to see how many have posted about Ric, praising his originality, flair, and brilliance. I was blessed to have known him, through friendship and work (his solo album Troubilizing was one I produced). It's hard to share the measure of a man in so few words, because, despite his greatness, Ric was open and down to earth in a way that surprised me. And in that allowed our private conversations to flow and float over 100's of topics (I was mostly interested in what he loved): the Cars, of course, his children and marriage to an eastern siren whom the world (he was aware) didn't think he deserved (he did, and she him), his guitars, Andy Warhol the person and not the myth, Boston (the city), new wave, deco art, NYC living, producing Weezer, being an A + R man, why he got out of the rat race of making hit records, Mutt Lange, grunge, and on and on and on. He's opine easy and I'd listen (for a change). Such pleasurable times I didn't fully appreciate until decades later. Lastly, two things: Ric did me a great honor when he recorded a song I'd written just for him, questioning none of it except it's quirky title (I'd gone quirky as a wry tribute). And a small memory I'll share: we were in Ric's basement, where he had a small, ad hoc studio for writing. And I was asking him a 1000th question on The Cars; in this case, the sound of the keyboard solos. He pointed at a relic. 'Well, that's it' he said. 'THE keyboard', said I? It was, and ironically at that moment Greg Hawkes stopped by and he demonstrated all those great sounds! But then I went for broke. I wanted Ric to show me how to play 'Best Friend's Girlfriend'. He picked up a guitar, played it perfectly (he was an ace guitarist) and handed it over. The sound, I noted, was exact. It was the pink Fender pictured above, and I dutifully played the opening riff as he'd showed. So what was the guitar, I asked? Ric pointed at the flamingo in my hands. My jaw dropped. It was THE guitar! Love you Ric! Gonna miss you forever WilliamPatrickCorgan

In the late 70’s, in between my obsessions for Kiss, the Ramones, The Clash & The Sex Pistols, I also was a big fan of The Pretenders, the B-52’s, the Police, Devo & The Cars...the 1st two albums are classics from start to finish. Sad to hear of Ric Ocasek’s passing #RIPRicOcasek pic.twitter.com/mlIBnVVL80September 16, 2019

Very sorry to hear of the loss of Ric Ocasek. What a talent. #ripricocasek pic.twitter.com/iqG3aEcIq5September 16, 2019

Back to back “one-two punch” for rock music in one weekend, damn. Eddie Money & just now, Ric Ocasek of The Cars . Full disclosure: In high school, my friends & I always gravitated more towards music that offended & defied convention: The screaming guitars of Van Halen & Ozzy, the screaming (literally) of Halford & Dio, the shock of Kiss & Alice, the complexity of Yes & Rush, the sexual boundary-pushing of Prince (& for that matter, Plant) the weirdness & cultural critiques of Zappa etc etc...But what’s interesting about both these guys’ work is that despite its relative “safeness” (it fit none of the above descriptions, was generally accepted by mainstream gatekeepers, was never threatened with censorship, didn’t cause concern by parent/teacher groups or DC Congressional Committees), it somehow occupied that safer space while being liked by those of us into the more unconventional (even dangerous, if you will) side of music. No, my friends & I didn’t wear Eddie Money or The Cars T-Shirts; we didn’t hang up their posters; we didn’t run out to buy their albums or attend their concerts..But you know what else we didn’t do? We didn’t turn the dial when they came on the radio (and these guys were ALL over the radio)! It may have been “safe” sure, but the songs were undeniably good, the hooks incredibly strong - so strong, in fact, that I can’t even look at titles like “Just What I Needed” & “Let The Good Times Roll” or “Shaken” & “Two Tickets to Paradise” without the songs getting stuck in my head! And I can only imagine their pressure to do some stupid gimmick or rely too much on image in their area of radio friendly rock, but they did not. Even after MTV, they kept it real, just a couple dudes who happened to make super-catchy, fun to listen to music. I met Eddie once - a former guitar tech of mine worked with him for many years - he struck me as down to Earth funny and a great guy. I have heard the same about Ric, though we never met. These two may be more associated with early mid 80s , an era long past, but they were great guys and true artists who will be missed & remembered for many years to come. RIP #eddiemoney & #ricocasek #Thecars Alex Skolnick