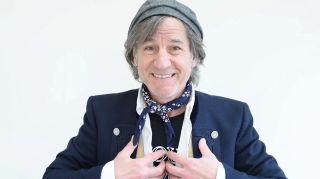 The 2016 lineup of Rainbow is ready to record any time Ritchie Blackmore wants them to, says bassist Bob Curiano.

They’re gearing up to play a handful of shows in June, after Blackmore decided to return to rock music for the first time since splitting Rainbow in 1997.

Curiano – a former member of Blackmore’s Night, who appeared under the name Sir Robert of Normandy – is currently using the stage title Bob Nouveau.

He tells Deep Purple Italia: “I’d love to go into the studio with this Rainbow. All we need is Ritchie to say, ‘Let’s go!’”

He says of the upcoming shows: “I think all of us feel under pressure, because of the fans’ expectations. For me, the pressure makes me work harder and get better results.”

The bassist won’t go into detail about what’s planned during the performances, but says of singer Ronnie Romero: “Why do you think Ritchie picked Ronnie for the job? I think he’ll hit a big home run, like we say in baseball.”

However, he admits the future of the band is “a mystery.”