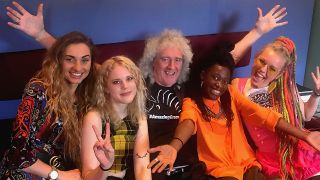 Queen’s Brian May has teamed up with pop rockers Kings Daughters for the new single Get Up.

The guitarist plays on the track which he also co-wrote and produced, with 10% of the proceeds from sales going to mental health charity, MIND when it launches on April 15. It's now available to pre-order.

A snippet of the upcoming video has been released and not only features May and Kings Daughters, but also shows people from around the world doing the Get Up moves from home amid the global coronavirus lockdown.

May says: “We’re launching this to the world not only as a kind of dance craze, but also a powerful tonic for people who really are paralysed with fear, depression or anxiety right now. Being a depressive myself, I definitely relate!

“I think kids and adults of all ages will feel the force of optimism and gratitude in this record when they sing and dance along to Get Up from isolation where ever they may be. The song will unite the world in hope for a better future.”

The group say: “We are lucky to have the equipment we need in our homes to record our individual parts for the album and we have already started sending files to each other to work on the songs.

“We could, of course, prefer to do this together in a studio, but we've worked so hard writing on an amazing album, so nothing will stop us from releasing it.”

Fans have until midnight GMT tonight (April 6) to send in their video clips for inclusion in the final cut. Visit the Kings Daughters website for further information.

Further album details will be released in due course, but you can get a flavour of the feel-good song by watching a clip of the video below.