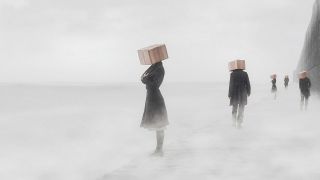 With the cancellation of almost all live entertainment owing to the the worldwide Covid-19 outbreak many bands and artists are turning to the Internet to as an outlet for their creativity and to entertain their fanbase, most of whom will be confined to home. Many are free, some require a small fee, others simply ask you make some kind of donation to help during a time when most artist's income has been made all but non-existent. But this is also a fantastic time to be discovering new artists.

The Dream Theater keyboard player is hosting another piano mediation at his official Facebook page at 8pm (GMT). " Let’s unite through the healing power of music and reverberate peace and positivity throughout the world," says Rudess.

Metalogue are a British industrial/IDM/ambient outfit from London who are combining with Emily Baily Visuals, a Vision Mixer, Visual Artist and VJ, who worked together at prog-friendly promoter Chaos Theory's takeover at London's Boston Music Rooms.

They'll be joining forces for a interesting stream collaboration this evening at 8pm (GMT) on Facebook. "I will be transmitting a live Metalogue set with webcam footage from my Dalston studio to Emily's AV rig a few miles across town, where she will add her incredible generative/cinematic visuals and stream the whole thing up to a Facebook Live session," say Metalogue.

"This is something neither of us has attempted before, so expect technical difficulties and connection dropouts as we thrash the neighbourhood internet in the name of underground music! There will be a live-chat running with the session, so get involved and join the fun!"

Hats Off Gentlemen It's Adequate

Malcolm Galloway and Kathryn from the London-based proggers Hats Off Gentlemen It's Adequate will be streaming live form their front room via the band's Facebook page at 5pm today (GMT).

"Malcolm will be singing and playing piano and Kathryn playing flute," they say. "Stripped down acoustic versions of our songs, and some requests (probably including some Pink Floyd). This is a bit of a trial run, as it will be our first attempt with the software, hardware, and with a FB live stream. If you can join us we'd be delighted to welcome you, and will try to interact with comments as we go along."

We're trying to bring you as much information as we can. If you're a band who are  having your own online gig, or a fan who knows about one, and we haven't included it here, please e-mail us at: prog@futurenet.com and we'll add you to our listings.

Stay safe and prog on.