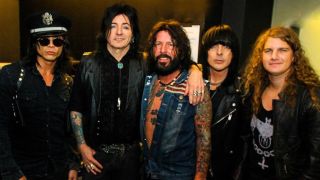 The two founding members of the band reunited last year for a handful of live shows, ending years of dispute over the outfit’s name, which at one point saw Lewis perform with his version of LA Guns and Guns the other.

And since their reconciliation, the pair have been working on new material together – and Lewis can’t wait for people to hear it.

He tells Westword: “It’s going really good. Tracii and I are getting along really well now. We’re both really focused on the same goals. We’re working on new songs.

“It sounds amazing – I’m not exaggerating. It’s so slick, and every song is so well-crafted. Big choruses. It’s really interesting, and I think people are going to be knocked out by it.

“We’re gonna release it on CD and digital, of course, but we’re gonna put it put on vinyl. We have enough to put it out on double vinyl gatefold.”

They’ve been playing under the LA Guns’ Phil Lewis & Tracii Guns banner, but Lewis hopes that will be shortened in the near future.

He explains: “It’s just to let people absolutely know without a shadow of a doubt exactly what they’re getting. Hopefully, after six months to a year, we can just go back to calling it LA Guns.

“I’m not gonna let numbers dictate. You’re supposed to act a certain way at a certain time. I’ve been lucky health-wise, so I keep doing it.”

The band hope to release the new album this summer.