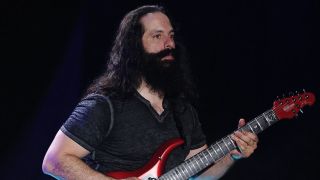 Dream Theater's John Petrucci admits it wasn't easy writing some of the shorter songs that appear on the band's latest album.

The prog heroes released their self-titled 12th record last year and it includes a number of tracks which don’t run as long as some of their previous efforts.

And the guitarist and main songwriter says penning snappy songs isn’t usually in his nature.

He tells Guitar Interactive: “The basic mentality is that every song doesn’t have to be 12 minutes long. It’s actually hard to do.

“The challenge is to try to write and keep the style that we write in without straying from the thing that makes us unique. And to try to do that within a four, five or six-minute mark, it’s hard to do.

“But we did that on a few songs and kept the energy up and everything. And we also made sure that we did include a big epic piece on there. We made sure that there was an instrumental on there, which is something that we wanted to do.

“But as far as those few songs that are kind of on the shorter side, we did say it would be a nice challenge to try to keep things short. And it’s really hard.”

Petrucci recently said that being “uncool” was one of the keys to their continued success. He said: “It’s what separated us out and make us successful in the long term.”