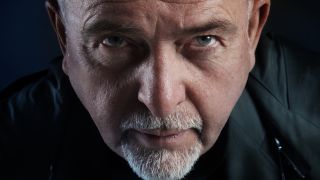 Prog Magazine's Progressive Music Awards, presented by Orange Amplification and in association with Currencies.co.uk is honoured to announce that Peter Gabriel will be the recipient of the 2014 Prog God Award at this year's ceremony.

The ceremony takes place at the prestigious Underglobe, beneath Shakespeare’s Globe Theatre, on Thursday September 11, and the Prog God Award, presented by Orange Amplification, recognises the innovators of the past 40 years. Those, without whom, the world of music would be a much poorer place – and no one is more deserving of that accolade than Peter Gabriel. Previous winners are Rick Wakeman and Ian Anderson.

Jerry Ewing, Editor of Prog Magazine, says: “Few people in the music world really do fulfil the criteria for a Progressive Music Award better than Peter Gabriel. From a groundbreaking eight years with Genesis to a solo career that has now stretched almost 40 years, few artists have striven to push back the creative boundaries, generating a body of work that in its very nature progresses ever onwards. From massive worldwide hits through startling experimentation and pioneering work with world music, as well as his fantastic work outside of music and an astute grasp of technology, it really is an honour to pay tribute to Peter in this way.”

Peter Gabriel is one of the most innovative and inspirational people in rock music and beyond. He has won over 25 internationally recognised music awards and is a double inductee of the Rock and Roll Hall Of Fame – both as a member of Genesis in 2010 and again as a solo artist this year. He is a co-founder of world music festival WOMAD and is renowned for being a champion of world music. He founded Real World Studios, one of, if not the most, admired and desired recording studios in the world and Real World Records, which has released and supported some of the most diverse music in the world.

Outside music, Peter is a renowned Human Rights activist. He has a long-standing association with Amnesty International and in 2006, he founded WITNESS, a non-profit Human Rights organisation, which led to him receiving the North-South Prize as well as the Man of Peace Award from the Nobel Peace Prize Laureates. With Sir Richard Branson and Nelson Mandela, Peter initiated The Elders - an international non-governmental organisation of public figures who work objectively and without any vested personal interest to solve difficult global conflicts. In 2008, he was named one of Time Magazine’s 100 Most Influential People in the World.

In the 1990s, Peter broke new ground creating Xplora with Steve Nelson, it became the world’s largest-selling music CD-ROM and that was followed by EVE,developed with Michael Coulson, an innovative music and art adventure game which won the prestigious Milia d’Or Award Grand Prize at Cannes in 1996. He was one of the founders of On Demand Distribution (OD2), one of the first online music download services, which subsequently became the dominant music download technology platform for stores in Europe and was the company out of which, Nokia later built Nokia Music.

In celebration of the 25th anniversary of the release of his seminal album So, Peter has been playing live shows through Europe. The Back to Front Tour has received huge acclaim, leading to additional dates being added later this year - click here for more details. In addition to the tour, the London O2 Arena show last October was filmed using the latest 4K technology and Back to Front, Peter Gabriel Live in London is on sale now on DVD and Blu-ray with deluxe editions also available.

In its short but illustrious history, the Progressive Music Awards, presented by Orange Amplification and in association with Currencies.co.uk, has received both critical and public acclaim for acknowledging and celebrating one of the most successful but unsung genres of music. These awards give the prog-loving public the opportunity to celebrate and give recognition to the bands they love.