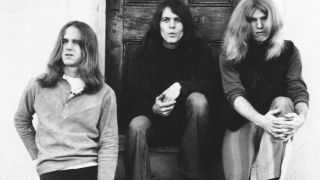 Paul Whaley, the drummer from influential San Francisco blues rock outfit Blue Cheer, has died at the age of 72.

The news was confirmed by the band’s co-founder and former manager Eric Albronda via the San Francisco Chronicle, who report he died from heart failure at his home in Regensburg, Germany, on Monday.

Blue Cheer were formed as a six-piece in 1967 and were named after their favourite brand of LSD. After seeing Jimi Hendrix perform, the lineup was trimmed to the trio of Whaley, bassist and vocalist Dickie Peterson and guitarist Leigh Stephens.

Blue Cheer’s first album titled Vincebus Eruptum followed in 1968 and, thanks to its thunderous sound, furious solos, psychedelic vibe and their intense cover of Eddie Cochran's Summertime Blues, they were pioneers for what would become heavy metal.

Whaley walked away from the band in 1970, and, reflecting on the split, the drummer told Classic Rock: “We started screwing around with drugs – and the wrong kind of drugs, too.

“The money was going, there was conflict between me, Dickie, and our guitar player at the time, Randy Holden. The chemistry just wasn’t right. There were arguments, and we just didn’t want to be around each other. So we just decided to break it up.”

Whaley dropped out of the music scene for the next 10 years and attended rehab on several occasions.

However, he rejoined Blue Cheer in 1984, moved to Germany in 1992, and spent several stints in the group until the death of Peterson in 2009.

A memorial service is due to be held later today at the Holy Trinity Church in Regensburg.