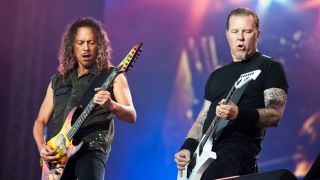 The internet is currently ablaze after Metallica unveiled new track The Lords Of Summer in Colombia last night.

We got Dom Lawson to give us a blow-by-blow walkthrough of the track, from every riff to every wah wah solo and the number of classic Hetfieldisms (or lack of).

Metallica - The Lords Of Summer Guide

0:10 – Song begins…big dramatic intro, vaguely reminiscent of …And Justice For All-era, albeit with fewer notes in the riff.

0:49 – Intro ends and straight into a very simple staccato riff from Hetfield that kicks the main bulk of the song off with a dash of gnarliness.

1:34 – A brief drum flurry from Lars heralds the beginning of the first verse, which is definitely in keeping with Death Magnetic’s semi-thrash vibe, replete with motoring double kicks…

1:36 – Rob Trujillo appears to be using a pick. If nothing else, if old Robo-fingers is resorting to plan B, this means Metallica are playing faster than they have for some time.

1:40 – Disappointing lack of “Heyyyy!” and “Yaaaayuh!” action thus far. Papa Het is probably saving them up for later.

2:35 – Dropping to mid-tempo for a moody sounding post-chorus part

3:00 – Still no “Heyyyy!” and not a single mention of the Metallica FAMILLLEEEEHHHH. Probably a temporary oversight.

3:08 – Back into the heads-down thrash vibe for a second verse… this main riff clearly harks back to Metallica’s early days, which is always welcome. Distinct lack of “Heyyyyy!”-style behaviour now causing concern. There’d better be some on the album, Papa Het!

4:40 – After another chorus and post-chorus, Lords Of Summer heads into driving Black Album territory with shouts of ‘Hey! Hey!’ gleefully echoed by the Colombian punters…

4:50 – Still no “Yaaaayuh!” from Hetfield. He’s probably concentrating too hard on getting the song right first time. Humph.

4:54 – Here comes Kirk with his first solo on the new song…more of a repeated lead melody than anything more shreddy, to be fair.

5:43 – Kirk and Het team up for some neat guitar harmonies, while Lars and Rob thunder away at breakneck speed beneath them.

6:00 – Kirk starts to let rip properly for the first time with a blazing solo that comes with some nice detours into wah-wah territory…

6:48 – Back into pummelling mid-tempo riff territory again, with some more new Het riffs thrown in for good measure.

7:22 – That chorus returns, with added staccato riffing… and then that post-chorus is reprised, before the whole song spirals to an abrupt end with a final burst of riffy thrash. But no “Yayyyyyyuh!” to finish things off. Shame.

OVERALL FIRST IMPRESSIONS: A promising preview of a heavier take on the sounds of Death Magnetic. Not bad!

The Biggest Metal Band In The World bring the Metallica By Request set to Sonisphere in July, while you can read more about the new album in our awesome cover feature, out now with our current issue!