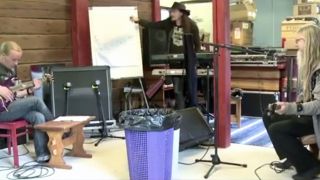 Nightwish say the need to "show off" their musical skills is diminishing as they get older.

The band released the fourth in a series of video updates from the studio where they are recording a new album.

And guitarist Emppu Vuorinen says their egos are taking a back seat as they try to make the most of the new material.

He says: “I don’t know if it has something to do with age, but the need to show off has diminished even more. It’s more like you want to do justice to the song and not strut your stuff.”

The band are working on their eighth album, their first with vocalist Floor Jansen and now full-time member Troy Donockley.

The follow-up to 2011’s Imaginaerum is set for release next year.