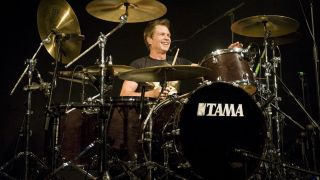 Mr Big drummer and founding member Pat Torpey has died at the age of 64.

The news was confirmed earlier this morning by the band on Facebook.

They say: “With breaking hearts we tell you that our brother, friend, drummer and founding member, Pat, passed away Wednesday, February 7, from complications of Parkinson’s disease.

That was followed by a statement from Mr Big bassist Billy Sheehan, who says: “I’m sorry to be the bearer of such sad news. Pat Torpey has been my closest friend in music for over 30 years.

“He passed away yesterday from complications as a result of Parkinson’s disease.

“Pat was one of the finest human beings I’ve ever had the privilege of knowing, and the honour of working with. All of us in Mr Big had nothing but the highest respect and admiration for him.

“He is loved by anyone and everyone who ever met him. And surely one of the finest rock drummers the world has ever known.

“Please keep his sweet wife and wonderful son in your prayers. I love you, Pat. You made the world a better place. We will miss you. We will never forget you. Rest in peace, my brother.”

Torpey revealed he was suffering from Parkinson’s disease in the summer of 2014. He was unable to play on all tracks on latest Mr Big album Defying Gravity, with the band’s touring drummer Matt Starr stepping in to complete the record.