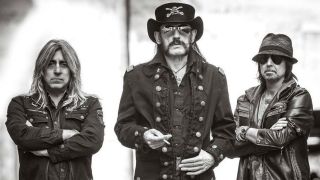 Phil Campbell says there are plans to hold a series of tribute shows in honour of late frontman Lemmy.

The iconic outfit came to an end with the death of leader Lemmy Kilmister in 2015, with guitarist Campbell going on to form Phil Campbell And The Bastard Sons, while drummer Mikkey Dee joined Scorpions on a full-time basis in September 2016.

But asked by Mitch Lafon if he’s ever considered Motorhead reuniting for live shows with guest musicians like Metallica’s James Hetfield or Foo Fighters’ Dave Grohl, Campbell relies: “Yeah, it’s on the cards, but it’s just going to be a few select shows – we’re not going to be touring with it.

“We’re trying to get these people involved. We’ll just do some special shows worldwide, which would be good – a tribute to Lem and to the band maybe, yeah.

“But it wouldn’t be an ongoing thing – everyone’s too busy. But we could do something special. We’re still trying to work on that now.”

Last year, Dee hinted that talks about a Lemmy tribute concert had been discussed.

He said: “There’s a possibility of doing that when the time is right. One day there’s going to be a craving for something like this, and when there’s a craving for it we have to do it in a proper way.

“Only with the right formation and the right timing – to do it too soon would be a disaster. But I’m totally open to doing something and I’m going to do my damnedest to put something really, really great together.”

Phil Campbell And The Bastard Sons will release their debut album The Age Of Absurdity on January 26 via Nuclear Blast.